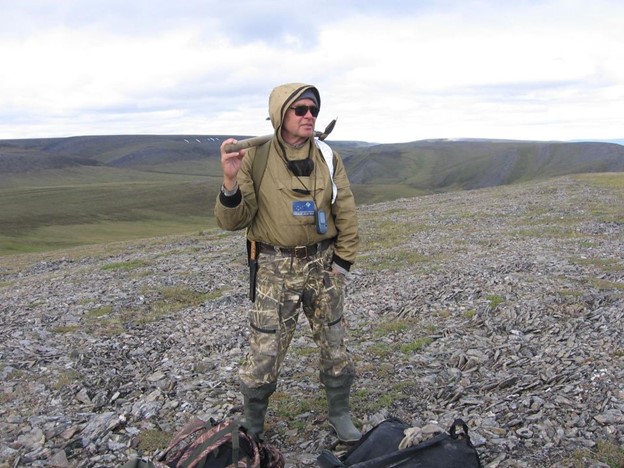 The chief geologist of ALMAR Sergey Grakhanov gave an interview to the Yakut edition of Ulus Media about how diamond exploration is conducted in the region.

“Becoming a polar geologist was the limit of my dreams”

– I think that the passion for travel and books played a major role in choosing a profession. As a child, he read books by Vladimir Obruchev, Ivan Efremov, Grigory Fedoseev, Oleg Kuvaev, Jack London, descriptions of polar explorers and dreamed of repeating their path, looking for territories described in novels on geographical maps. There were also wonderful Soviet films that glorified the heroes of labor – ordinary workers, ordinary geologists, topographers, sailors, builders and fishermen working in the Far North, where it was quite difficult to get to work. The work of geologists has always been surrounded by a romantic halo, becoming a polar geologist was the limit of my dreams, so I never had any doubts about choosing a profession.

Is geology romance or hard work?

– Geology is hard physical and mental work, often in difficult weather conditions. Therefore, you need to have a whole set of qualities. In particular, good physical health. After all, during expeditions it is necessary to overcome long search or geological survey routes. No one will carry tools and rock samples for you. In addition, you need to be prepared for a sudden change in the weather. The Far North does not indulge in warmth in summer either! If one day the temperature can reach 20 degrees Celsius, then tomorrow the picture may change dramatically. Then it rains and a cold wind, and maybe it will snow in the month of July. Therefore, you should always be prepared for any surprises of nature. Difficult weather conditions can be waited out in a shelter. Sit in a tent and heat the stove. And if you are in the tundra and there is no firewood, then the so-called drip stove on diesel fuel helps out. If it’s not there, then you get warm in the sleeping bag. I have not met bearded geologists with a guitar and songs around the campfire, usually you get so tired during the route that there is no time for songs.

– In general, we can say that geology is a man’s profession. As a percentage, men really work more in field geology, but the effectiveness of women with their numerical inequality is not lower. At one time, at the dawn of diamond geology, thanks to women (N. Sarsadskikh, L. Popugaeva, N. Kind, E. Elagina, M. Vasilyeva), the Yakut diamond-bearing province was discovered: the first kimberlite pipe “Mir”, the most unique indigenous deposit in the world, and the largest diamond placer in the USSR, Ebelyakh, in the Anabar district. Nowadays, the heads of geological departments have come up with an excuse that girls cannot be used in the field, they are weak and cannot perform ton-kilometers, and that there are only problems with them in the field. Believe me, I have a lot of expeditions under my belt, most of them were conducted in the Arctic, but I do not recall a case when the presence of girls in field detachments negatively affected the production process. On the contrary, in their presence, in extreme cases, the guys become more collected and courageous, there are no sanitary and hygienic problems in the detachments, there is no profanity, well, we usually have someone to perform ton-kilometers.

– There was a significant failure in the profession in the nineties and noughties, when young people rushed into lawyers, economists and managers. Now the situation is getting better, there are a lot of smart guys and girls in geology. In the middle of the two thousandth years at JSC Nizhne-Lenskoye, we recruited 15-20 students of the University of Yakutia for practice and taught every year, many of them now work in geological enterprises of Yakutia, having become qualified geologists by vocation. Among them I would like to mention Nadezhda Suzdalova, Evdokia Cheremkina, Syrgylana Neustroeva and Semyon Etigyasov. The guys from this cohort, Vadim Pavlov and Anatoly Cheremkin, were awarded the most prestigious title for geologists “Discoverer of the Russian deposit”. If young people are wondering “is it worth studying to be a geologist?”, then the main thing here is to decide whether it is yours or not. If you are inclined to a profession just for the sake of getting a diploma, then definitely not worth it. Geologist and modern technology Modern technology will not be able to replace the geologist himself, but they can help! A geologist is a brain, and he also needs hands: modern drilling, mining, processing and geophysical equipment, reliable transport, laboratory equipment and advanced office equipment. At the beginning of our century, the point of view was actively popularized that if all the signs of diamond deposits were put into a computer and processed, then all new indigenous diamond deposits would be discovered. So what? What they pawned, they got, or rather, they didn’t get anything. Billions of rubles have been spent to verify this point of view! But it was confirmed only that each deposit is characterized only by its characteristic features, which only a geologist can recognize. The same can be said about the use of the most advanced mining and drilling equipment: where to drill and where to dig is laid only in the head of a geologist.

Drilling of wells in the Khatystakh field.

– I have more than 30 expeditions under my belt, which usually last from snow to snow: in the north of Yakutia, work is carried out from the beginning of June to September, and in other Arctic regions from the beginning of July to mid-September at all. Weather conditions no longer allow working for longer periods. But to be honest, I didn’t exactly count my number of expeditions. And why? After all, the most significant ones in your life are remembered, which lead to major discoveries. In my case, this is the exploration and transfer to industrial development of the largest placer of the Russian Federation – in the valley of the Ebelyakh River (1979-1985); the discovery and exploration of the placer of the Bolshaya Kuonamka River, which confirmed the foundations of my PhD thesis, despite the negative conclusions about its industrial significance by specialists of ALROSA (2008-2014); the discovery of new diamond-bearing areas on the Pronchishchev ridge (1988) and in the Olenek River delta (2007), where many expeditions had previously carried out prospecting work to no avail; the discovery of ancient placers of Late Triassic Retic age diamonds (2006-2010); substantiation of a new genetic type and large-scale manifestation of diamonds in Karnian deposits (2006-2013); the discovery of the first diamonds on the rivers, where they were not previously recorded; the discovery of the first diamond on the Taimyr Peninsula (2020).

“The main thing in expeditions is not to lose heart”.

– Expeditions to any minerals are carried out almost according to the template. To begin with, geologists develop a justification for the work, a geological task and calculate the costs of these works. After the approval of these documents, a draft and an estimate are drawn up for it, which are guiding documents. Then, too, according to the template: backpack – equipment – products – helicopter – tent – routes – fatigue – mosquitoes – rafting or moving on all–terrain vehicles – routes – midge – cold – helicopter. Sometimes discoveries, but not a fact! The main thing in expeditions is not to lose heart, to joke more, it’s better on yourself, since the reaction of a person who has been in a small team for a long time can be unpredictable. It is also not superfluous to always cheer up and praise a colleague once again! And, of course, faith in success! Well, I am somehow ashamed to talk about all the everyday difficulties, they are already obvious. But in geology, after dropping out during the first two or three years, physically and mentally prepared people remain! Of course, a lot depends on the organization of working conditions. Thanks to the general director Andrey Vitalievich Karkh and the head of the site Andrey Vladimirovich Zudikhin, everything is organized perfectly! Tents with floor and electric heating, a sauna and a dining room with an excellent chef Alexey Kimovich Bochkov! 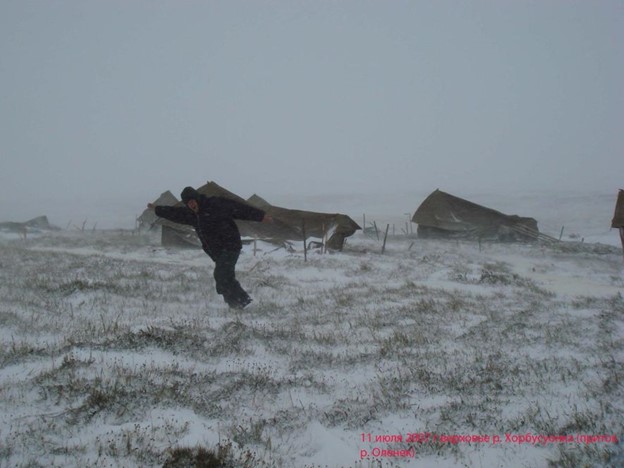 The upper reaches of the Khorbusuonka River (July 11, 2007 there was a powerful cyclone with a hurricane wind. Tents were knocked down and covered with snow)

– Search operations are carried out with a tray and a shovel. Search and evaluation works – with drilling, sinking of pits and ditches, enrichment. Exploration works – with drilling, sinking of pits and ditches, enrichment, delineation of the deposit, calculation of diamond reserves and testing of reserves in government agencies. The specifics of exploration work for placer diamond deposits are not much different from those for other types of raw materials – the same uniform network of mine workings, only samples of a much larger volume, which requires mandatory installation of processing plants. How is the potential of the deposit determined? After the exploration of the deposit, a feasibility study of the exploration conditions is compiled, in which the economic feasibility of operating this facility is calculated. The main parameters are: diamond reserves, their content and price, availability and volumes of overburden, logistics. Diamond reserves are not infinite Deposits explored or discovered back in Soviet times have already been partially or completely worked out. The raw material base is significantly depleted, and new facilities cannot compare in volume with the deposits discovered in Soviet times and provide the usual volume of diamond production. Of course, at the end of the decade, this will significantly affect the revenues to the budget of the republic and will affect the labor market in Anabar, Bulun and Olenek ulus. It is necessary to start large-scale prospecting work, which is impossible to do without state subsidies or other types of market support (development of junior companies, attracting investors), since prospecting for diamonds is a very expensive business.