Andrey Karhu has been appointed CEO of ALMAR

Participants of the limited liability company “Arctic mining company”, which develops diamond deposits in the Arctic zone of the Republic of Sakha (Yakutia) under the brand “ALMAR – Arctic Diamonds”, at the General meeting on September 14, 2020, elected Andrey Karhu as the General Director of the Company.

Andrey Vilyevich Karhu – honored miner of the Republic of Sakha (Yakutia), professional engineer and head of diamond mining enterprises. Prior to his appointment as CEO of ALMAR, he served as Deputy CEO – Chief engineer of the company.

Born in Yakutsk. He graduated from Yakut State University and has two higher degrees: geologist and mining engineer.

In the diamond industry for decades, has passed all steps of career ladder from a mine foreman in the May party Allah-Yunskoy GRE to become chief engineer of the Russian Federation’s largest diamonds’ miner at placer deposits – JSC “Almazy Anabara”, a subsidiary of the ALROSA, which mines diamonds in the Lena-Anabar diamondiferous subprovince – a region of ALMAR operations.

Directly supervised the creation of the production base and development of the largest placer diamond deposits in the Republic of Sakha (Yakutia): Molodo, Mayat, Ebelyakh, Morgogor, Istok located in the Lena-Anabar diamondiferous subprovince.

Author of a number of inventions that reduce the time of exploration, improve the quality of testing and reliability of diamond reserves. With his participation, advanced drilling of wells on a discharged grid was introduced, followed by sinking of heavy mine workings (pits, mines), and large-volume testing was introduced when sinking underground mine workings using an excavator instead of bulldozer trenches during gross field testing.

Rich professional experience, deep knowledge of the industry and the region, as well as the talent of the head of Andrey Karhu will allow to maintain the dynamic pace of development of ALMAR during the transition to the stage of creating a production complex and the operational stage of the company. 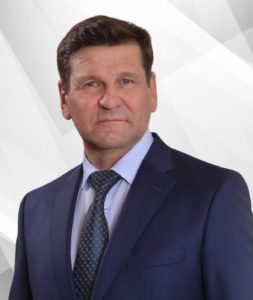